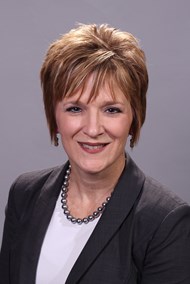 JoAnn Thompson was named Vice President, Asset Management, in June 2014. In this role she is accountable for the company’s electrical transmission and distribution lines, substations, planning, and maintenance, system operations, land rights and permitting, capital budget, project management, and FERC/RTO policy. Management of Special Projects and Metering and Construction Services, including CAD and GIS as well as Facilities and Construction/Building Services, was added to Thompson's role in 2017.

Thompson began her career with Otter Tail Power Company in 1997 as Research Specialist. She joined the System Operations Department in 1999 as Electrical Engineer and transitioned to Tariff Engineer in 2000. She became Policy and Compliance Advisor in 2006 and in 2009 advanced to Manager, Federal Regulatory Compliance and Policy.

A native of Underwood, Minnesota, Thompson earned her bachelor of science degree in electrical and electronics engineering from North Dakota State University in 1990. She has held leadership positions in numerous industry organizations and is currently on the Midwest Reliability Organization (MRO) Board of Directors.