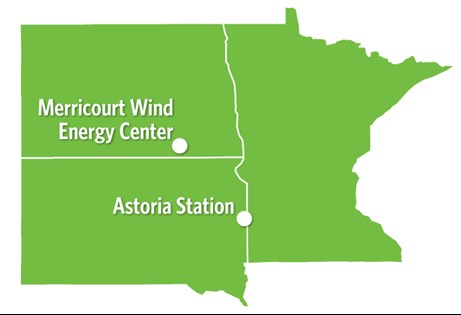 Wind and natural gas resources complement one another

Construction of the Merricourt Wind Energy Center began today. The company expects the 15-month construction process to create more than 150 jobs and provide millions of dollars in economic benefits to the local area. The project will cost approximately $270 million, generate enough energy to power more than 65,000 homes, and add 10 permanent jobs to the local economy. The project includes 75 Vestas wind turbines and covers approximately 14,000 acres of land. Wanzek Construction based out of Fargo, North Dakota, will construct the wind center. The Merricourt Wind Energy Center will be the largest capital project in Otter Tail Power Company’s history.

“Our North Dakota service area has some of the best wind resources in the country to produce low-cost energy,” said Rogelstad. “North Dakota’s diverse and abundant generation resources help to ensure the price our customers pay for reliable service remains among the lowest in the nation. And, North Dakota’s energy development leads to investments, jobs, and tax revenues that many other states can only envy.”

Construction of Astoria Station began in May. The station will have flexible operating options—providing energy during periods of high demand—with low emissions. The company will invest approximately $158 million in the project, which it expects to complete in 2021. During the 13-month construction period, the company estimates the project will create an average of 50 construction jobs, with a peak of 70 during the height of construction. That equates to approximately $30 million in construction labor costs. And, when complete, the station will require two to three full-time employees to operate it.

“Astoria Station complements our wind resources by providing a reliable backstop when the wind isn’t blowing,” said Rogelstad. “Backing wind with natural gas captures the low-cost energy made possible by the current market for wind generation while helping to ensure sufficient reliability from dispatchable generation.”

Rogelstad also commended South Dakota’s supportive business climate and noted support for Astoria Station from the Governor’s Office of Economic Development, under the Reinvestment Payment Program. “We’re grateful that our customers ultimately will see lower energy costs from Astoria Station due to this excellent program,” said Rogelstad. “The program played a significant role in our selection of the site.”

“Partnerships with state and federal agencies and the communities we serve have guided us on our path. Our customers’ needs have been at the forefront of our decision-making,” said Rogelstad. “And, today, we’re seeing years of planning and innovating come to fruition.”