Electrify Your Ride Sweepstakes winner takes to the road in Tesla

This fall we partnered with Drive Electric Minnesota and two other area utilities to offer customers a chance to win one week in a Tesla. The Electrify Your Ride Sweepstakes was open to current Otter Tail Power Company or Minnesota Power customers and members of Great River Energy and its 28 member-owner distribution cooperatives.

Peoples’ experience kicked off in Minneapolis, Minnesota, where he picked up his free rental—the all-electric 2015 Tesla Model S P85D. In ideal driving conditions and on a full 100% charge, this Tesla has a 253-mile, 85-kilowatt-hour (kWh) battery life.

Peoples, a Minnkota Power System Operator and avid electric vehicle (EV) fan, drove the Tesla as much as he could and put on an impressive 1,250 miles in seven days. After picking up the vehicle in Minneapolis, he drove to Duluth, Minnesota, then to Grand Forks, North Dakota. Peoples also drove to Grafton and Park River, North Dakota, and finally from Fargo, North Dakota, back to Minneapolis to return the vehicle. 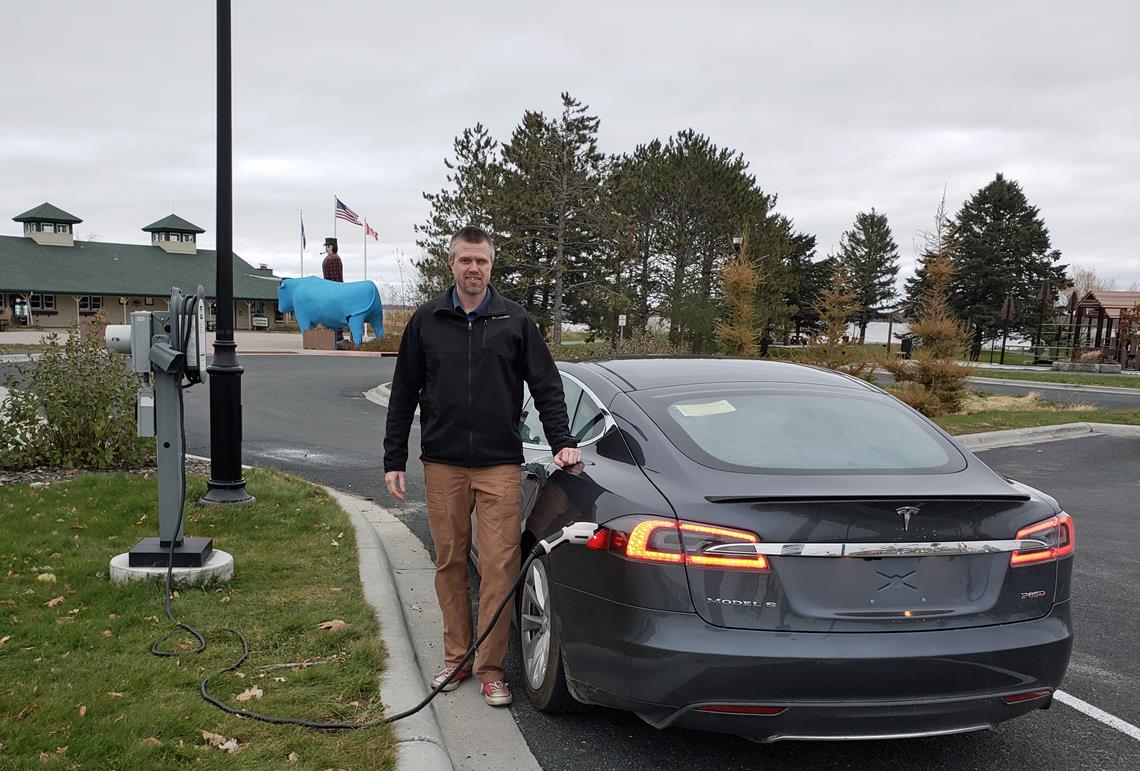 Keeping the all-electric vehicle charged and ready for the road required careful planning. Peoples took advantage of the app PlugShare, a database and EV charging station map, to help him locate available chargers. “The biggest downfall to the areas I visited was the lack of public chargers along the way—specifically Tesla Superchargers,” said Peoples. “At a 19% battery, the Tesla took almost nine hours to charge at a Level 2 32-Amp charging station.” Most public chargers are Level 2 chargers that provide approximately 12 to 25 miles of range per hour of charge. Tesla Superchargers typically take only 75 minutes to reach a full charge. Pictured is Peoples taking advantage of the free Level 2 charging station in the Paul Bunyan Park parking lot in Bemidji, Minnesota.

Charging challenges aside, Peoples loved his time in the Tesla and highly recommends experiencing a drive in one yourself. “Driving an EV makes sense for most of the average person’s daily driving. And they’re very affordable to operate,” said Peoples. “My daily commute to work is 56 miles round trip. At an estimated 10 cents per kWh to charge it would cost me just $2.50 to $3.50 round trip per day.” The same trip in his current vehicle costs around $10 per day.

Once battery technology gets better and the charging infrastructure improves in our region, Peoples hopes to make the switch to driving an all-electric vehicle.